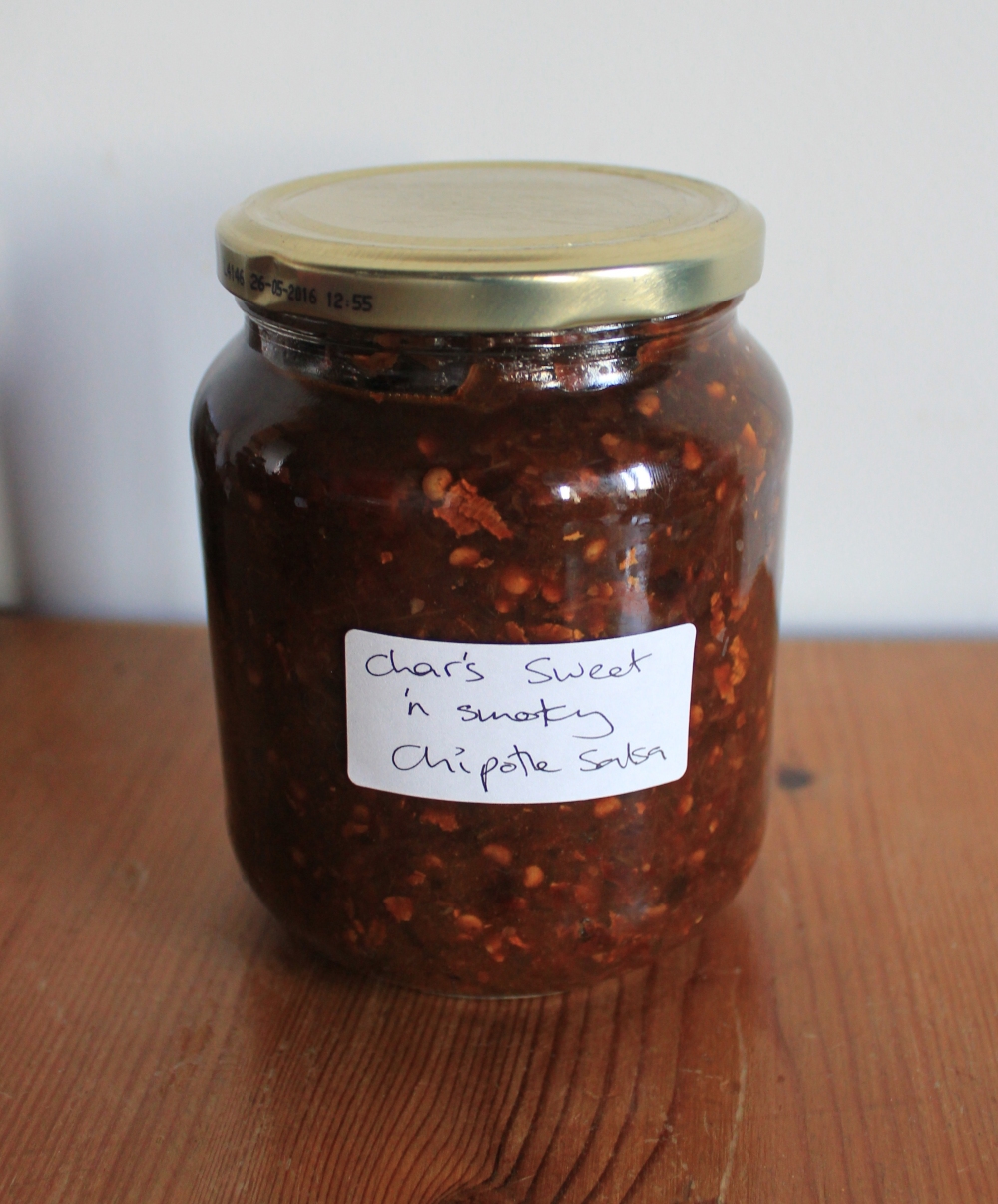 Winter is coming! I really don’t like being cold and as a sun worshipper I’m always chasing the heat! I often add some sort of spice or hot sauce to my food, especially at this time of the year. It’s like a constant quest, searching for the perfect amount of heat. The typical food in Cataluña rarely contains any heat or punch (called ‘picante’ here). This means at home, I’m always overcompensating. 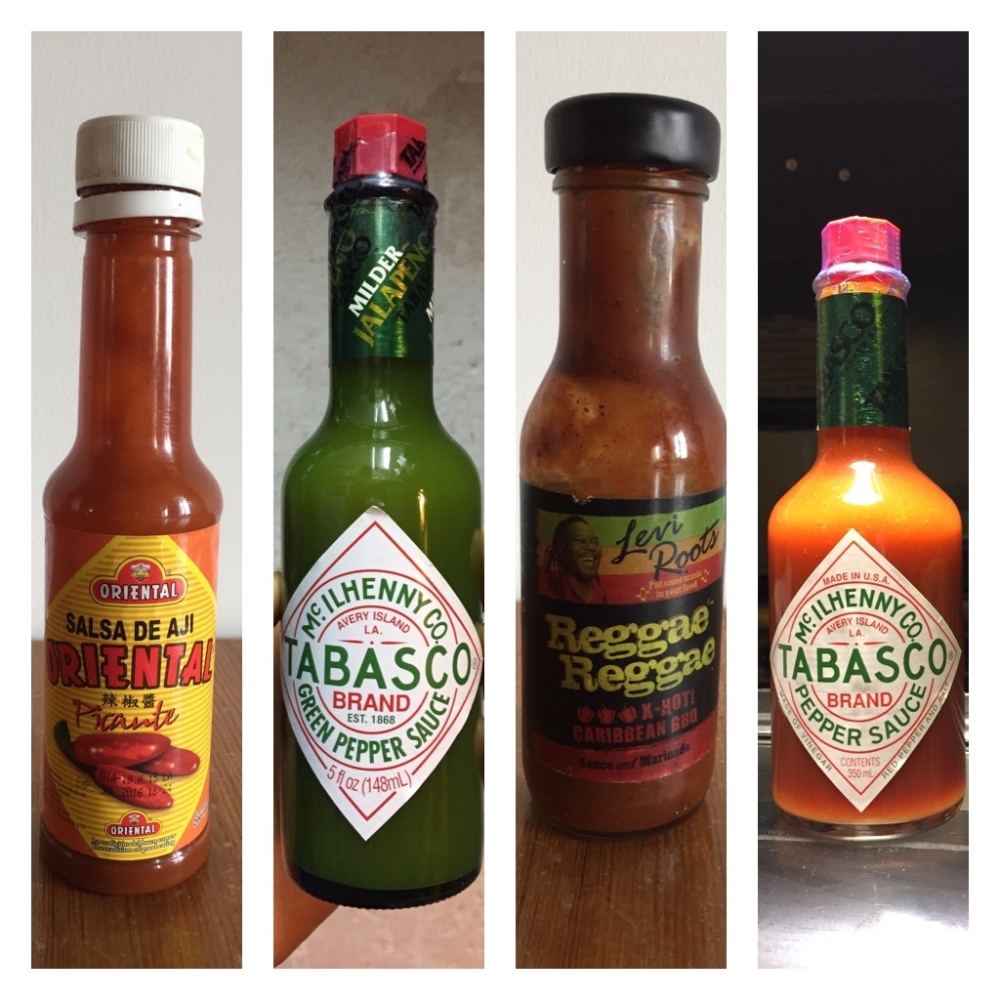 As well as a selection of hot sauces for different occasions we have a variety of chilies to hand, in various forms. Fresh, dried, flaked, powdered, they all have their uses. 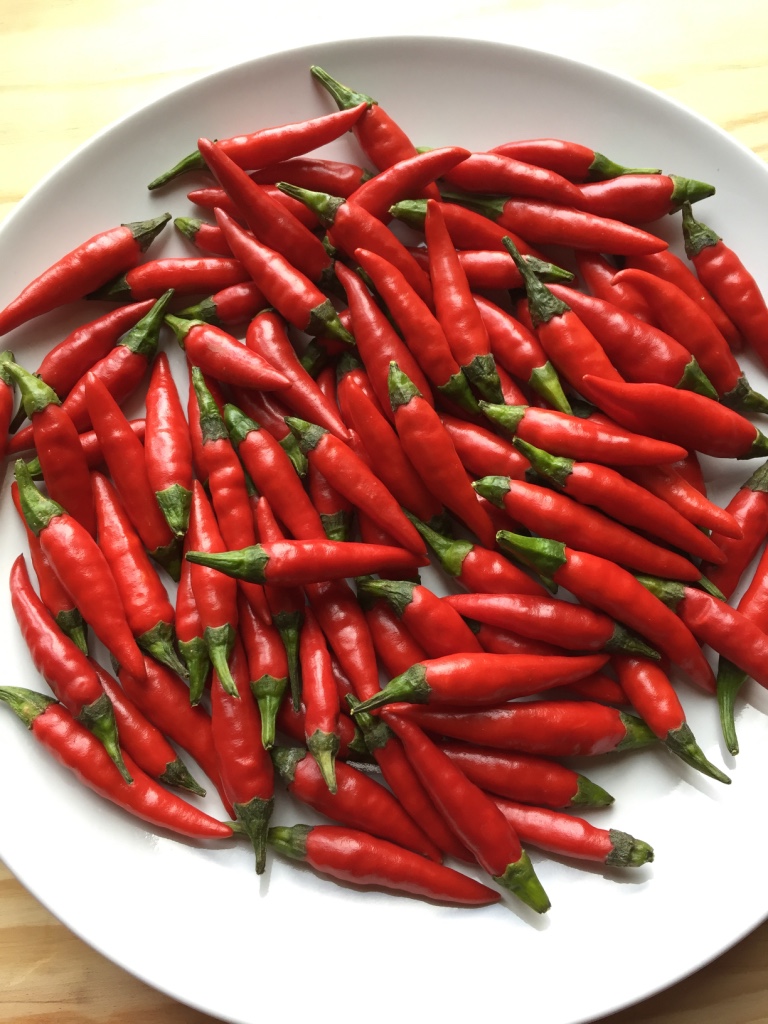 These little chilies don’t grow here in Spain, maybe that’s why the cuisine never incorporates them in their dishes. Our potent little friends are always on hand to add to curries or soups. In the summer I often leave them out on a tray, to dry in the sun. In the winter however, with less sun around, these can be dried in the oven. Spread them out on a baking tray and bake on a low heat for a few hours (until all their moisture has gone). These chilies were dried for 5 hours at 80º. Make sure you don’t use too high a heat, otherwise you kill off their potency. 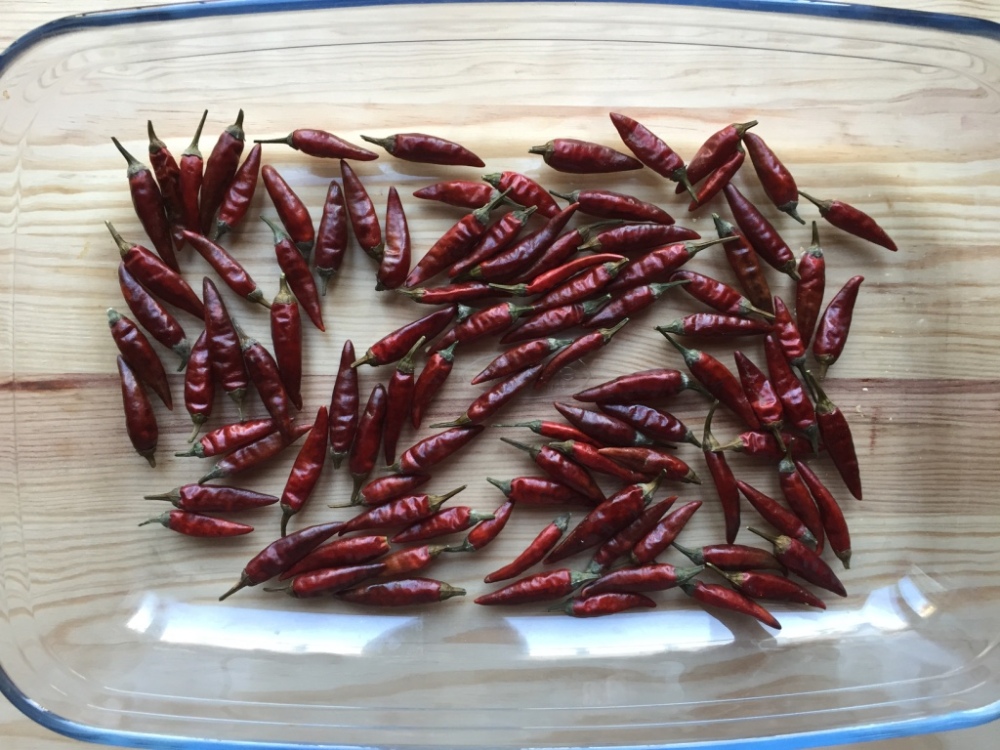 Scotch Bonnet peppers are one of the most potent forms of chilli (in terms of heat rating) and are used a lot in Caribbean food. My grandparents are from Antigua, Nevis and Jamaica in the Caribbean, to honour my roots I cook Salt fish and Ackee from time to time, always buying more Scotch Bonnet peppers than needed.
My love of chipotle started when travelling through Mexico in 2008. For those of you who don’t know, a chipotle is actually a jalapeño chili, which has been left on the bush to ripen. When they turn a deep red colour and have lost a lot of their moisture , they are picked and then smoked. What a fantastic combination, a smoky flavour which packs a real punch! They look like dried old bits of tree bark, but what they bring to a dish is fantastic. Their warm, smokiness adding another layer of complexity to the flavour of any dish. Most of the heat is in the seeds. For people who don’t like too much heat but like the flavour they just scrape the seeds off. Chipotles are very en vogue now, and you often see Chipotle Blood Marys on menu in Brunch eateries. 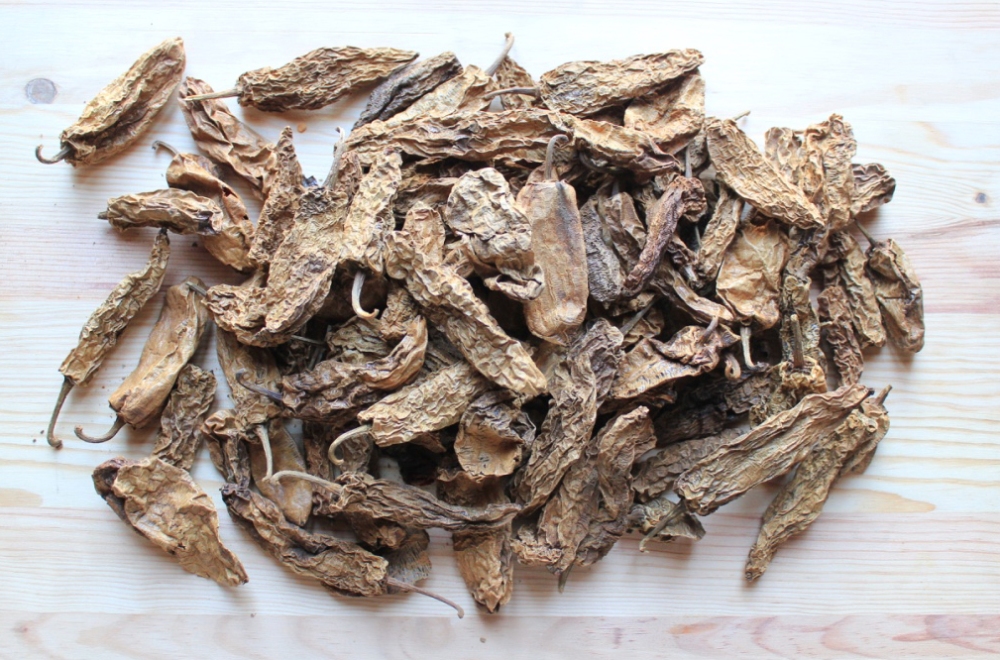 Rich is a friend and fellow Chipotle enthusiast, here in Barcelona. This time last year we got together to make a mammoth batch of Sweet ‘n Smoky Chipotle Salsa to give away as christmas presents (clearly saving ourselves enough salsa to keep us going for a good while). The salsa went down a treat, with many friends asking for the recipe. One old friend Leah, managed to finish her jar before the end of January. Respect Leah!!
The salsa is pretty easy to make and leaves your house smelling of sweet, smokey chipotle for a long while! It goes well with many things, in soups, stews, on a Jacket potato with cheese, in a marinade for fish. So many options! My recent joy was pairing it with hummus. Delicious! This recipe makes a HUGE quantity, we got 12 jars of salsa (twice the amount shown in the photo at the bottom of the post). You could easily make a quarter of the amount and have enough Salsa to last a while. If you get as addicted to the stuff as we are, it will won’t last very long and you will simply have to make another batch. By the way, Rich agreed to help me chop onions and be a hand model in a couple of the shots. We decided however, that he has a face that’s perfect for radio! Only joking Rich, he does have a good voice for radio, but that’s another story! 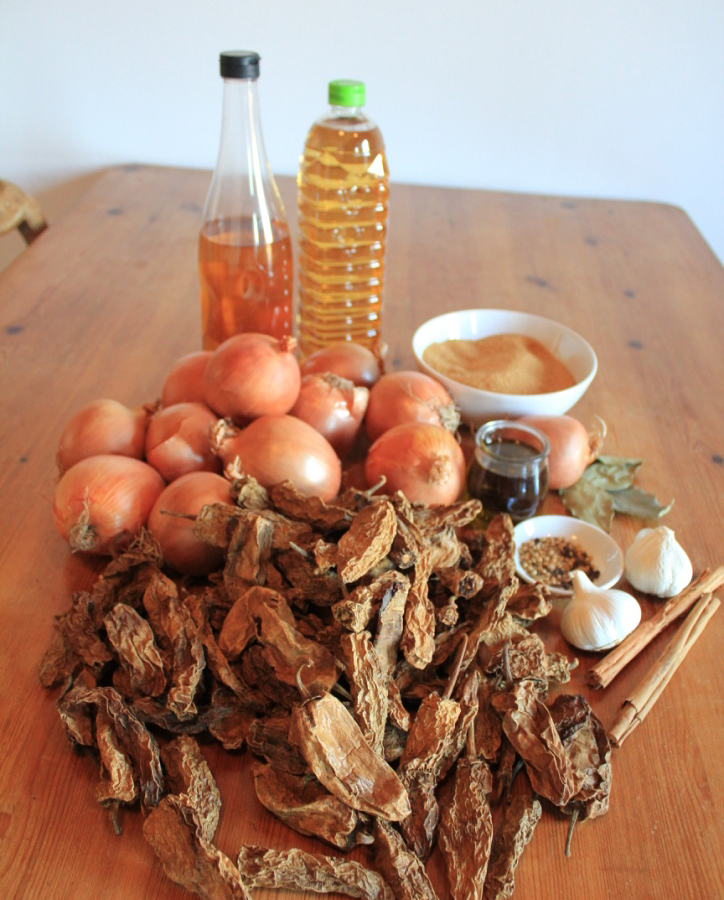 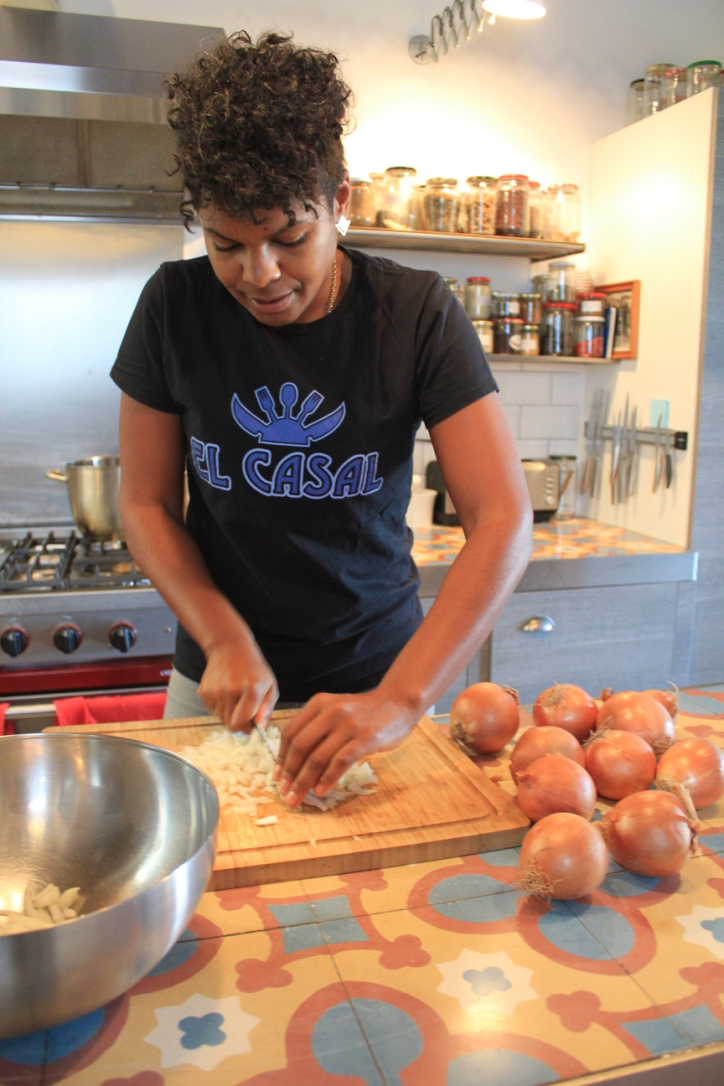 The most labor intensive part of the recipe is the prep. Chop the onions and crush the garlic. The rest is just stirring, and enjoying the sweet smells! 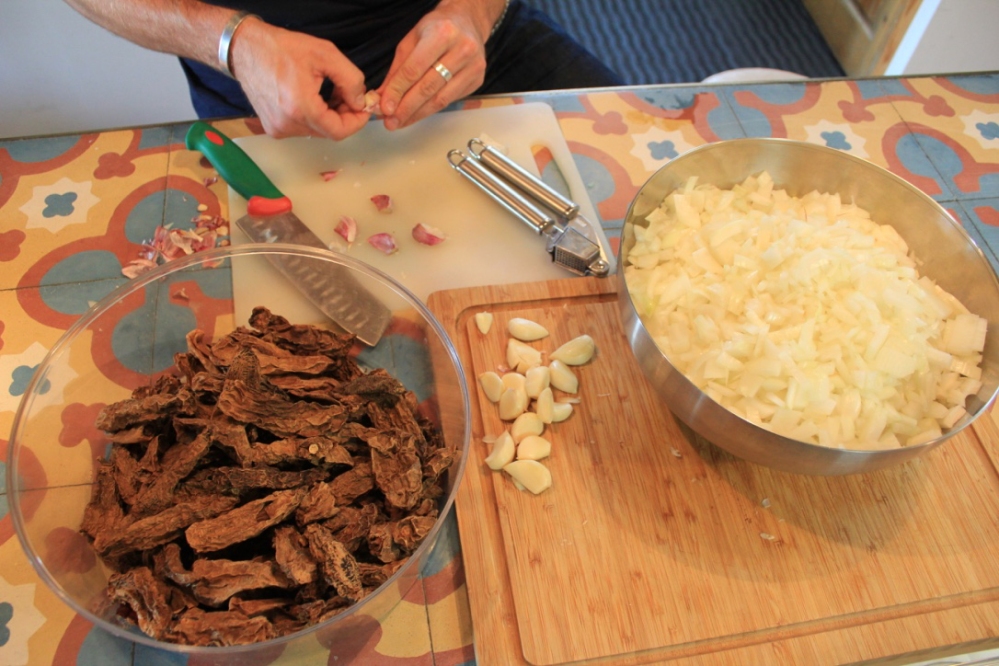 Heat the water, vinegar and sugar in a large saucepan until the sugar has dissolved. Add the chipotles, garlic and herbs and boil and then simmer for 15 minutes. 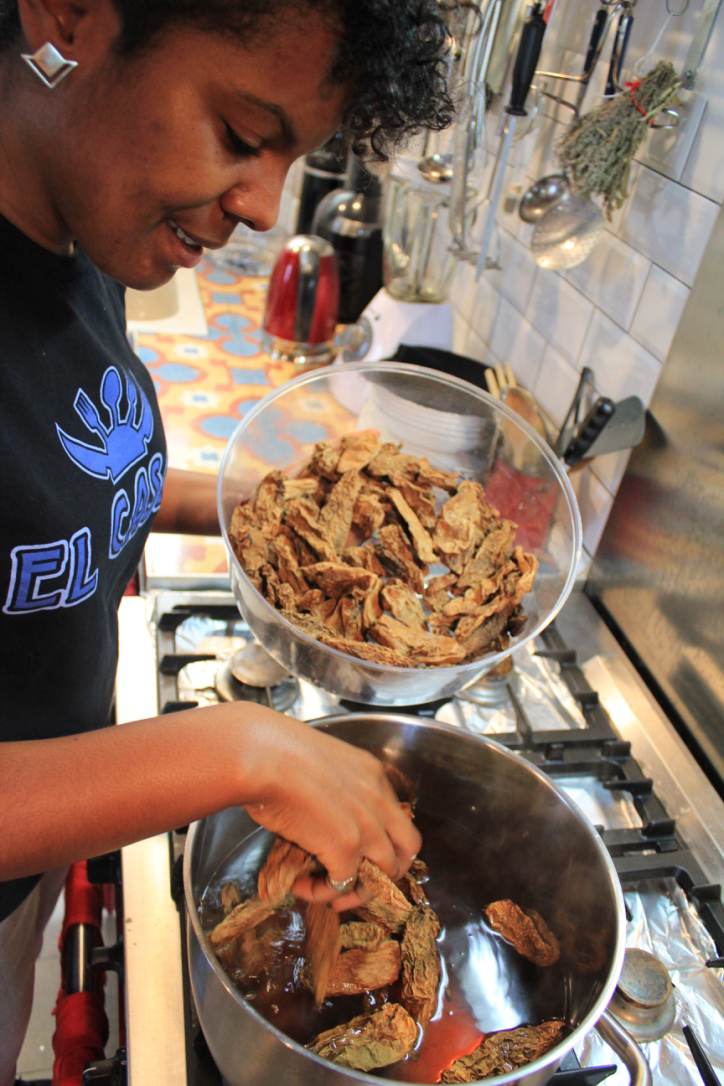 Add the onions, cloves, garam masala mix and cinnamon sticks, then simmer for another 15 minutes. 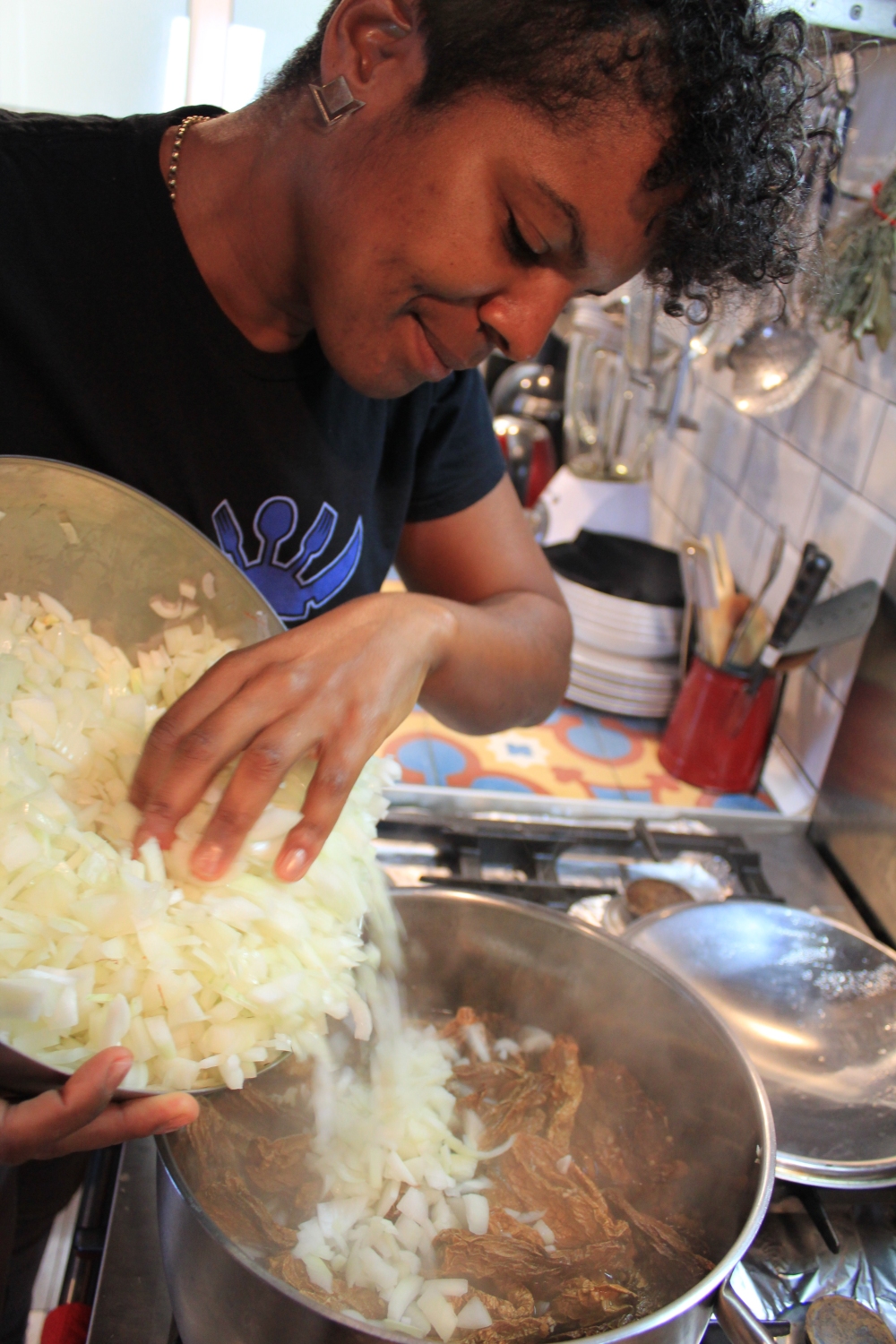 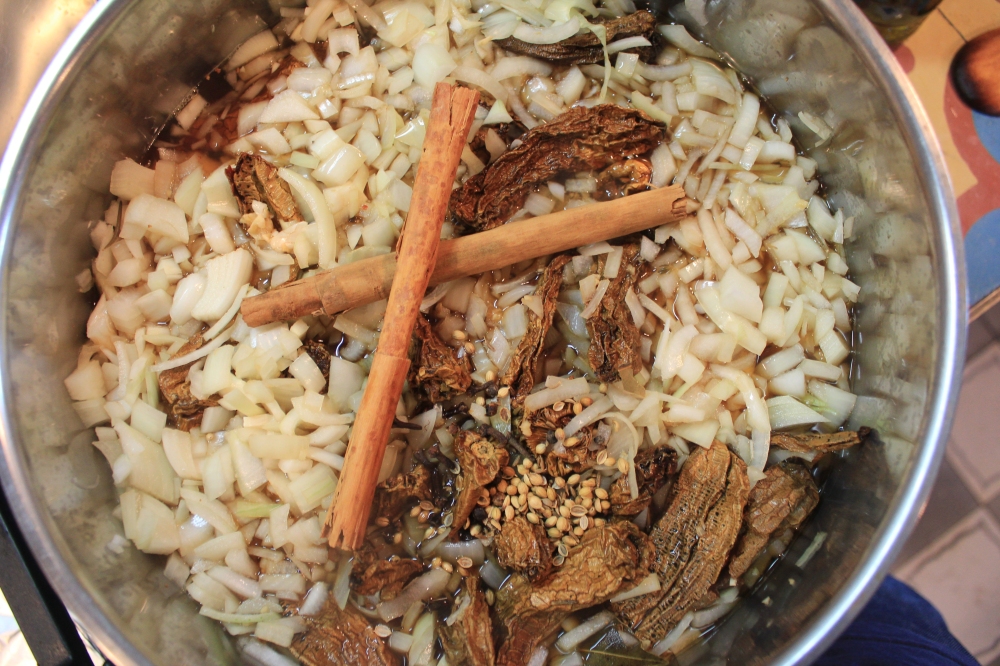 Add the oil and oregano and salt and simmer for another 15 minutes. 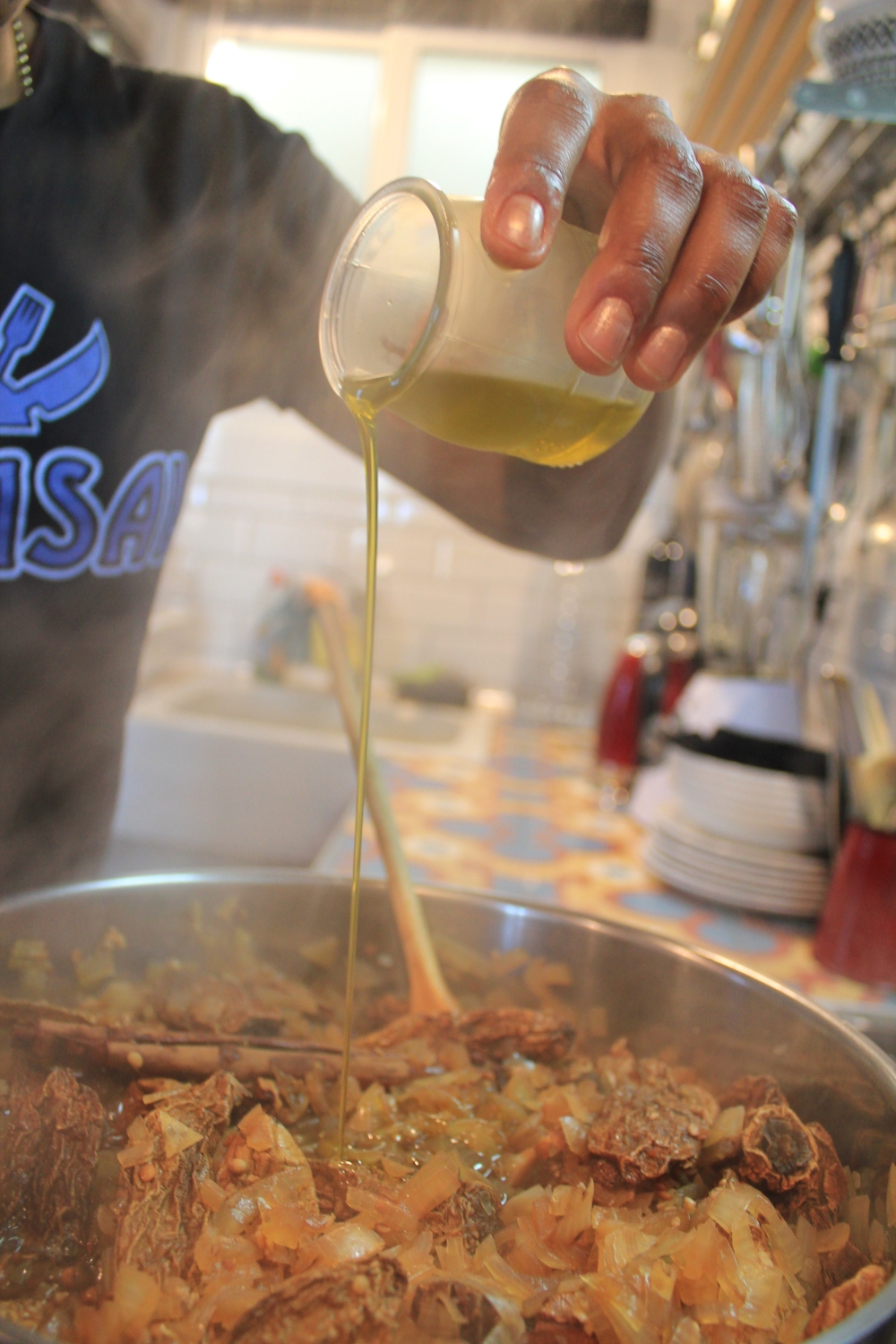 Turn off the heat, remove the bay leaves and cinnamon sticks and leave the sauce to stand for 2 hours. It is important to leave it to stand before you transfer it to the jars, because the ingredients continue to cook and infuse the flavours. 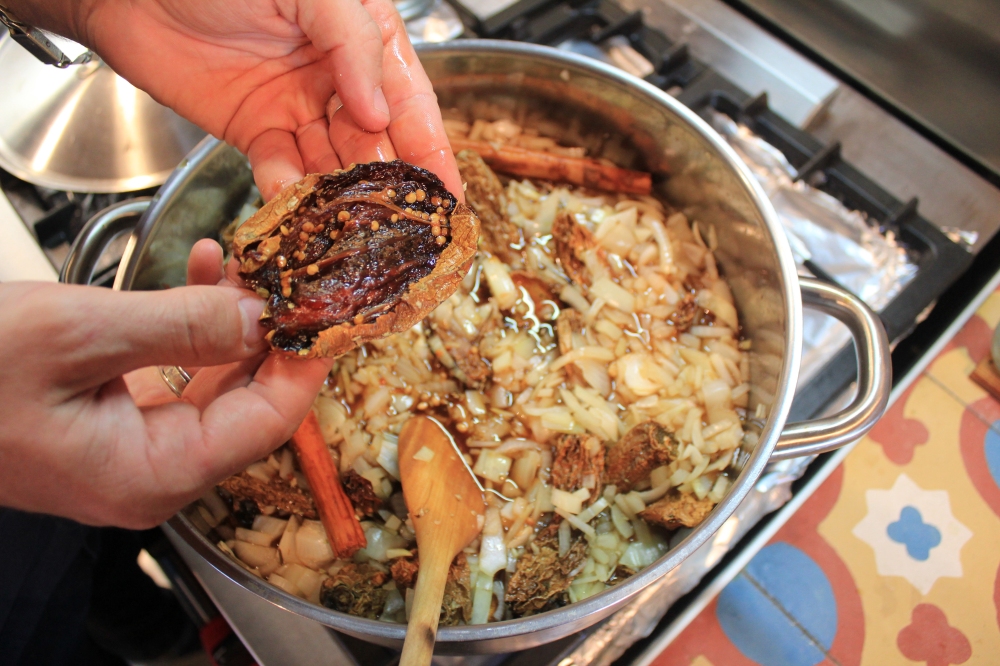 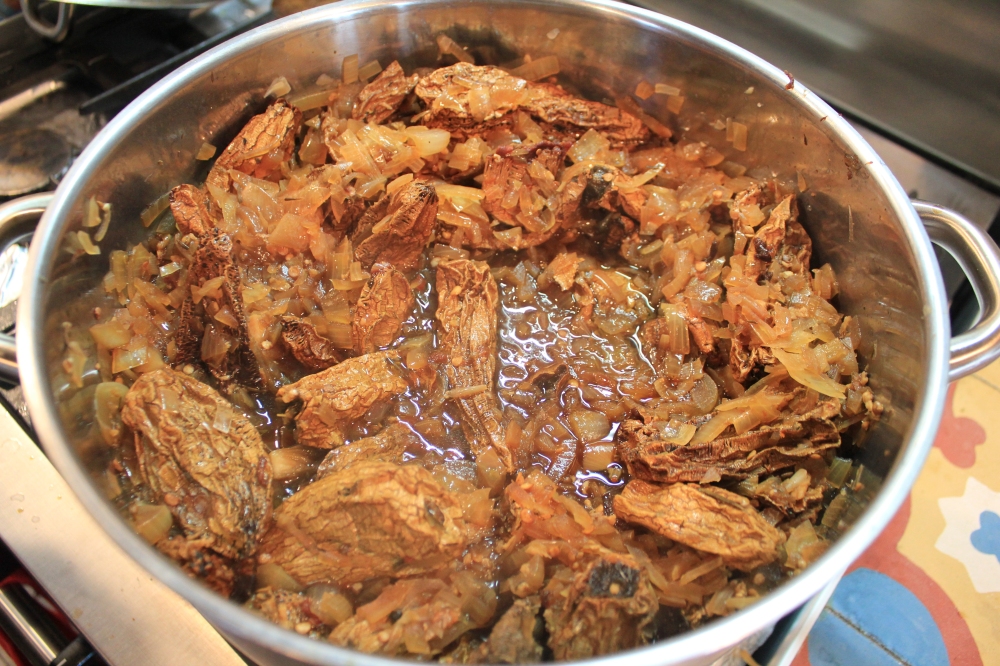 In a food processor blitz the mixture a bit. Not too much though, it’s nice to leave some texture to the salsa. 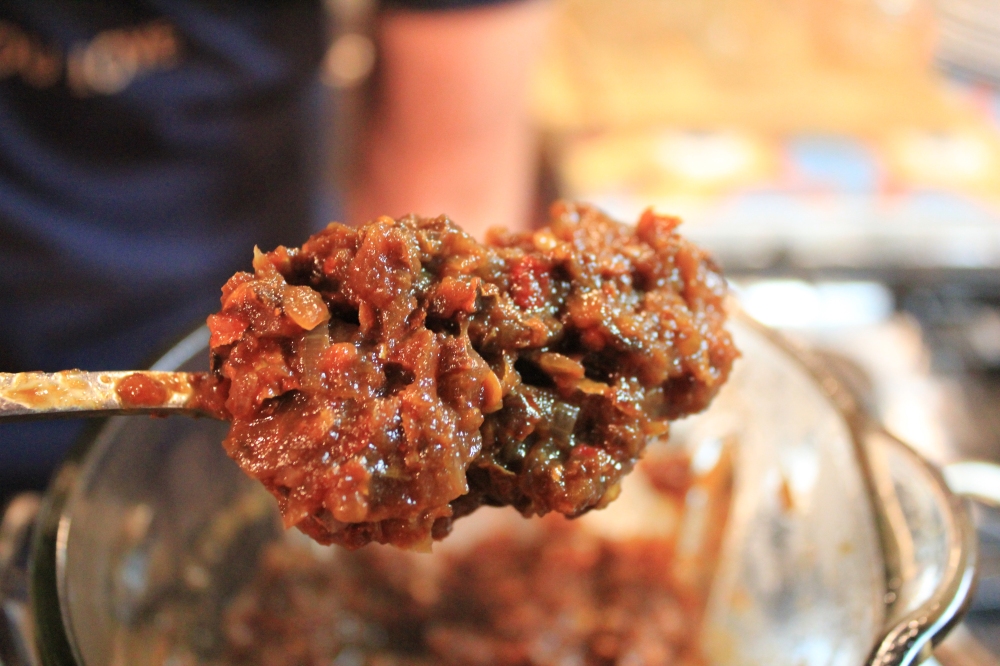 Ladle the salsa into clean jars, clean the rim and seal. We recommend you sterilise the jars before you fill them. Once filled, leave the jars in a pan of boiling water for around 20 minutes, to pasteurise them. Please remember, the recipe amount made twice the amount of jars you see here. Feel free to half or quarter the amounts for a more normal quantity of Salsa. Enjoy!