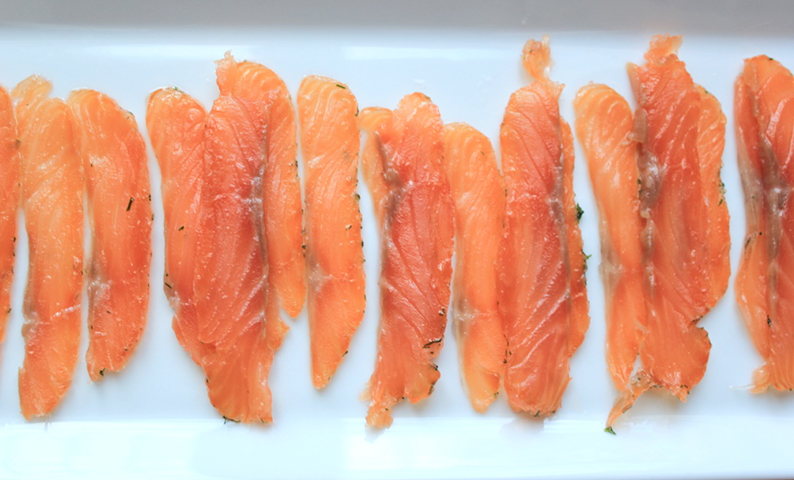 One of the pescetarian highlights of the festive period is Gravlax or smoked salmon. Gravlax is a traditional Nordic dish where fresh salmon is cured using salt, sugar and dill. So, this year Pescetarian Pleasures decided to buy a whole, line caught salmon and cure it ourselves.

The important thing is to buy the highest quality of wild salmon (not farmed salmon) if you can. We bought the salmon whole and asked the fish monger to fillet it (and save the trimmings to use for a broth or bisque later). Make sure you freeze the fillets before you start, to ensure any parasites are killed off. When they are defrosted, they are ready to be cured.

Pat both fillets dry with a paper towel. Using tweezers remove any bones that you can see or feel in the fish.

Using a very sharp knife, trim the fillets so you have an even piece of fish that is roughly rectangular in shape. This is important as if one part of the fish is much thicker than another, it will cure at a different rate. Save the trimmings for something else (I used mine in a stir-fry).

Line the chopping board with cling film and put some of the smoking salt on top, a bit bigger than the size of the salmon fillet, around 1cm deep.

Place the fillet on top of the salt and cover the fish with around 1cm of salt.

Once the fish is fully covered, wrap it tightly in cling film so that salt is covering every part of the salmon. Once wrapped, place on another sheet of cling film and wrap it again. This is because lots of liquid will be drawn out of the salmon when it is curing, the process gets very messy if it´s not wrapped properly.

Moving on to the second fillet, we are going to cure this one with a more traditional Gravlax technique. Chop the dill a few times, so that it is quite fine (discard and remove the stems).

Thoroughly mix the sugar, normal salt and dill in a bowl.

Put cling film over the cutting board and spoon on half the dill mixture (slightly bigger than the size of the salmon fillet). Lay the salmon on top and cover with the remaining dill mixture.

As before, wrap the fillet tightly, using 2 layers of cling film.

Place both fillets in a large tray to catch the juices, and put something heavy on top to weigh it down. As you can see I used a glass dish with bottles of water as weights. Leave this in the fridge for 24-48 hours turning the fillets twice a day. I would suggest 48 hours is perfect, we cured ours for a bit longer and the salmon was a bit too salty and hard.

Remove from the fridge, unwrap the cling film and scrape off the remaining salt mixture.

Slice the salmon as thinly as you can. When the knife hits the skin, the fish should separate from the skin quite easily.

The cured salmon will last a while in the fridge, but you can vacuum pack it if you are not going to eat it right away. It can be enjoyed on it´s own, in a small canapé for Christmas or our family tradition is to enjoy a breakfast of smoked salmon and scrambled eggs on a toasted bagel, as our breakfast on Christmas morning. Yum! 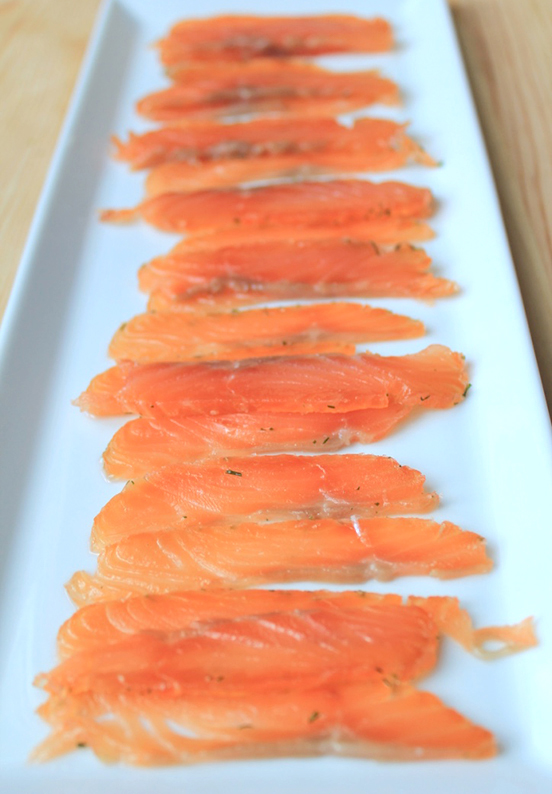